What retailers need to know about the Google Shopping Actions program

We briefly mentioned the Google Shopping Actions program in our previous post about Google Express. But because the initiative is becoming increasingly relevant, it’s time we dedicate a full post to get to the bottom of it.

What is Google Shopping Actions?

The Shopping Actions program gives retailers the chance to have their products seen on Google platforms like Assistant, Express, and Google.com. Complete with a universal shopping cart and a Google-hosted checkout flow, the program makes it simple for shoppers to take action wherever and however they shop. 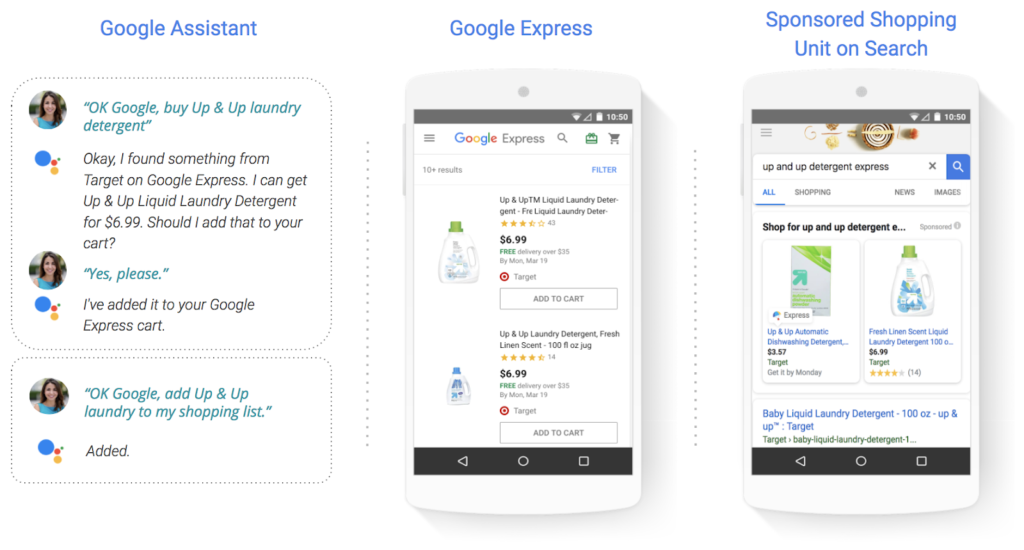 The program was developed as a response to Google’s internal data showing a need for “immediate assistance." Thus, Shopping Actions creates a new standard for online shopping - allowing shoppers to take action at their convenience throughout the day.

How does Google Shopping Actions work?

Google Shopping Actions takes into consideration the many ways in which a buyer can take action. For example, they could use their voice to add paper towels to their shopping list while in the kitchen. Later, they may add shampoo to their Express cart on their laptop. Then before bed, they could sign into their Express account on the mobile app to complete the transaction within Google.
Once the buyer has completed their transaction through Google - where they can save their payment information or activate 1-click ordering - the retailer(s) are notified of the sale.
The program runs on a cost-per-sale model, meaning retailers only need to pay once an order has been successfully placed. Shoppers can add products from multiple retailers to their universal cart and purchase within a single transaction.

The benefits for retailers

Essentially, an easier shopping experience for buyers makes it more likely that they will purchase a product. Therefore, by taking part in the program, retailers can expect an increase in sales. Moreover, Google recorded a roughly 30% increase in basket size for those taking part in the program.
Retailers can also expect to see a growth in returning customers. According to Google, 44% of buyers using their voice-activated speakers at least once a week said they use it to purchase items weekly(e.g. groceries or toiletries). On top of that, the program offers 1-click reordering, making it even easier to purchase the same item again.
“Our guests love the ease and convenience of making their Target Run without lifting a finger by using voice interface. And since the orders are shipped from a nearby Target store, they’ll have their items delivered to their home in just two days,” said Mike McNamara, Chief Information and Digital Officer of US retail giant, Target.
Shopping Actions retailers can also make use of Google’s AI to help them better target customers. Once it learns the pattern of how and what people buy, Google will surface the most relevant products when users have the highest buying intent. In the end, retailers can increase both loyalty and engagement through the Shopping Actions program.

The program is currently only available to select retailers with brick-and-mortar stores and warehouses based in the United States or France. In order to be considered for the Google Shopping Actions program, you must first express your interest here.
Also important to mention is the role of data quality. As is always the case with Google, success with Shopping Actions is dependent on high-quality product data. Once you’ve been selected to take part in the program, a Google contact will share specific policies with you. However, it is recommended that you familiarize yourself Google Shopping Ads policies in the meantime.

Walmart pulled out of Google Shopping Actions - but why?

Since its launch, Google Shopping Actions has gained a lot of attention with its target audience. It was a hot topic for a long while, making its rounds through the news cycle. It is often mentioned alongside the equally interesting Google Express. There have been a handful of small changes along the way; however, one surprising news item was almost swept under the rug: Walmart, who had been a hugely symbolic partner (as if this union said "look at all of us, coming together to take on Amazon!") quietly pulled out of Google Express and Google Shopping Actions. While other retailers, including some big names like American Eagle, Lucky, and Office Depot, have already been on and off Google Express, Walmart’s decision is striking.
Initially, Walmart was very much “on the bandwagon” for Express and Shopping Actions. They were one of the most important names associated with the efforts. When they pulled out of the program, there was little official reason given, but the speculation has been quite consistent. Even though Google Express is one of the few marketplaces that is really fit to go toe-to-toe with Amazon, Walmart would rather invest in its own home-grown marketing and marketplace efforts than continue with Google. In a time where digitally native companies live only on marketplaces, big names like Walmart want to own the entire omnichannel experience. They don’t want to share data or hand over the power; they want to keep their customers close.
While Target and others remain on Google Express, it seems that businesses in the ecommerce space will continue to surprise. Retailers might just splinter off and away from what seems like an obvious solution, preferring to instead seek long-term returns. As a result, we can come to two clear conclusions about Google Shopping Actions and Express. In many ways, they are easy-to-leverage, low-hanging fruit for online retailers. However, it may not be Google’s strongest bid to push back against Amazon. This is likely why Google continues to invest in and optimize the platform, looking for a way to finally bridge the gap - or, at least, compete with Amazon and not just with other, non-Amazon marketplaces.

Google is already updating and changing Shopping Actions and Express, bit by bit. There’s a new Google Shopping with a personalized homepage. Shopping Actions will be expanded to YouTube and Google Surfaces. Here’s hoping for more news and announcements in the future!