Why carousels beat videos in the social media engagement game

Over the past decade, social media managers and influencers have continuously experimented with many format types and ideas on the various channels. This has provided copious amounts of data that can validate some social media marketing practices over others. One claim that holds true with definite certainty is that carousels create more engagement than single-image or single-video posts. Let's take a closer look at carousels, why they beat video and how to get the best results.

What are carousels and how are they used organically and in ads?

There are two types of carousel content you can post: organic carousel posts and carousel ads. They can be used to show off a range of products, tell a brand’s story, and more.
A carousel post is a slideshow of photos or videos that people can swipe through horizontally (usually left). Carousels are available on various platforms, though they are most well known on Instagram, which allows up to 10 “cards” per post.
On the other hand, a carousel ad is a display ad format offered by social media platforms, such as Instagram, Facebook, and Twitter. The paid posts are an effective way of converting users, who see them alongside other content in Feeds and Stories.
Carousel posts and ads are more interactive than their image and video counterparts, and as such they tend to encourage more engagement and time spent on the ad.

Brands can leverage Instagram both with organic and paid content by using all the available formats it has to offer, one of which being carousels - both for Feed and Stories. Setting up ads on Instagram is a great way to gain from the app’s popularity, show off products, entice new visitors, and acquire potential clients. As many as 75% of Instagram users say they search for and visit a site after being inspired by a post.

Facebook dynamic ads, one of the most successful ad formats available today, come in single-image, carousels, or collections. However, carousels have demonstrated higher engagement levels than “regular” picture ads — up to 10 times more. The click-through rate is 72% higher than single image ads.
A Facebook Ads guide details the design and copy recommendations, as well as technical specifications, for each type of carousel ad on Facebook and Instagram.

Carousel ads on Twitter allow marketers from two to six “cards” in one single image ad. On their best practices page, Twitter recommends using “3+ ad formats to increase campaign awareness by 20% and purchase intent by 7%.” Carousels can also be posted organically.

Why do carousels drive better engagement than videos?

We often read that video is the format with the most impact. However, a Social Insider study showed that Instagram carousel posts reached higher engagement levels per post, up to 5.13% more than one-image or one-video posts, and received many more likes. Carousel posts have an average post engagement rate of 1.92%, compared to 1.74% for images and 1.45% for videos. 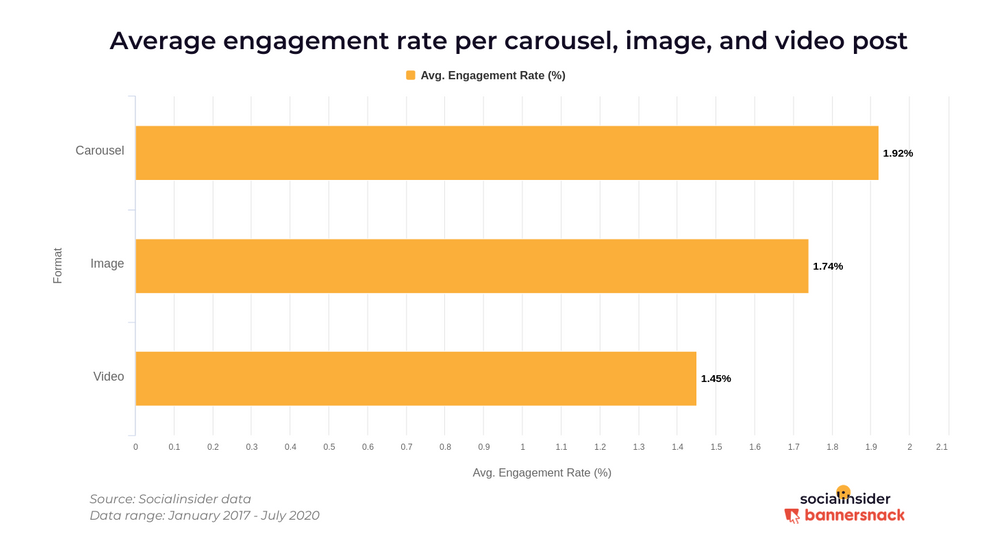 Though videos may seem like the natural go-to to drive engagement, they also demand a lot of attention from their viewers — something they’re not always willing to give, especially on social media. Videos on the Instagram feed can be up to 60 seconds long, though they don’t necessarily “get to the point” as quickly as carousels can. People generally only watch these videos from three to ten seconds, or an average of eight, before their attention span runs out. You need to ensure the efforts it takes to make a video will pay off with your audiences.
On the other hand, videos in a carousel, which can be short snippets and require less viewing time per individual video, are very effective. In a recent study, carousel posts containing videos received the highest number of comments, with a median of 26.07 comments per post.

How carousels increase your profile’s reach

Instagram carousel posts don’t only encourage engagement, they also drive your page’s reach. As mentioned, this format capitalizes on people’s attention span and nurtured reflex for swiping through each card’s contents. The time they spend engaging with the post is, in fact, longer than other posts. The Instagram algorithm picks up these lengthier visits and consequently identifies the associated account as show-worthy. Just like YouTube, the longer someone stays on the page, the more users will see it on their feed.
Hootsuite, a social media platform provider, says their data shows that carousel posts get 1.4 times more reach on average than regular posts on Instagram.

Research and data — based on likes, comments, and views — can indeed enlighten us as to which variations are the most successful. While engagement levels decrease after three cards, they increase again at eight. What's more, engagement levels are at their highest (2.07%) for carousels that use all 10 cards. It seems the desire to know more or discover the final revelatory point of the carousel’s last card drives users to swipe left. They get more invested the further along they go.
A mix of images and videos within a carousel also seems to generate the most engagement, with a rate of 2.33% per post, though many brands are still not making use of this.
So, how do you get people to swipe left? Next to actually telling users to do so (which sometimes works!), the content you post also matters. Honest, authentic, and on-brand imagery (consistent style, color, layout) that tells an intriguing story – without being preachy – is the most effective. Videos and photos both need to be high-quality and follow their brand’s style and and color palette,
Even when portraying a product to drive your social commerce efforts, it needs to be done so in a compelling, humanized way, like showing people in real situations and using the products. One example is Gap; the clothing brand uses stunning visuals that show people effortlessly wearing the clothes in dynamic situations. 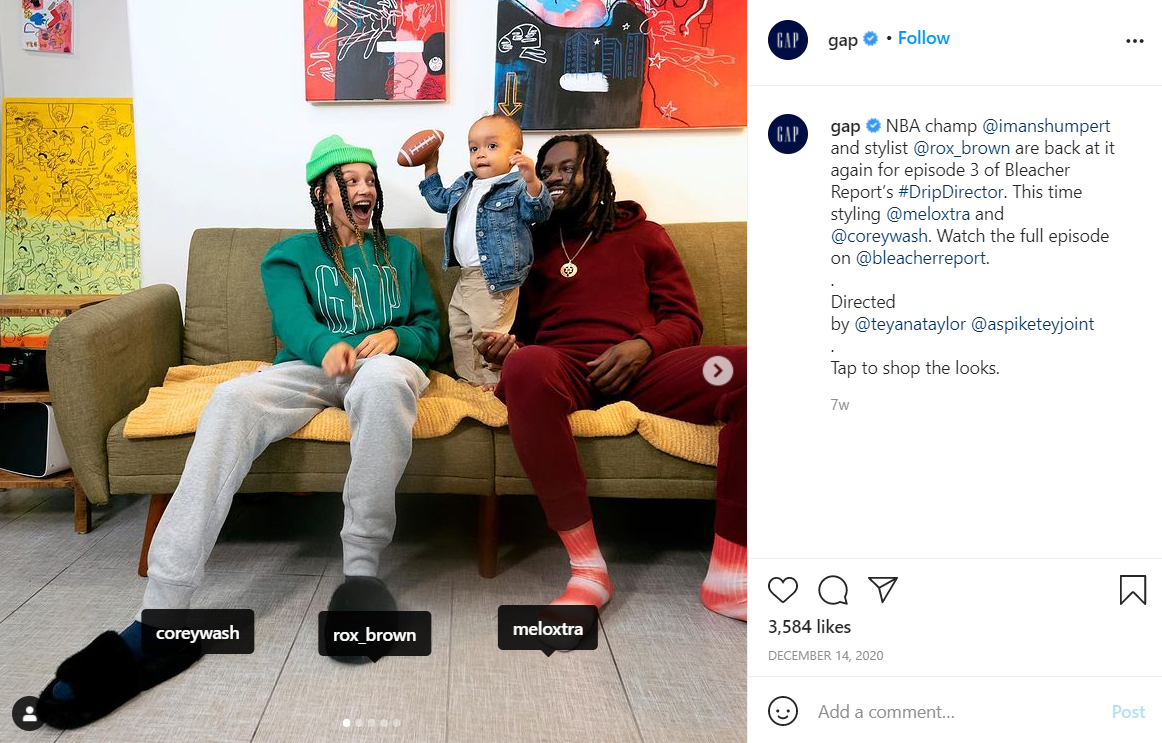 By contrast, companies don’t need to only post pictures of products to gain followers and new clients. One example of a retailer who hardly posts retail pictures, but has achieved mass amounts of engagement, is Patagonia. Through their sport-centered, outdoorsy, ethical and environmental-themed images – often in carousels – they capture people’s attention by highlighting values rather than the product itself. Posts with reassuring and motivational messages actually encourage users to swipe left; the engagement rate increases from 1.83% to 2%. 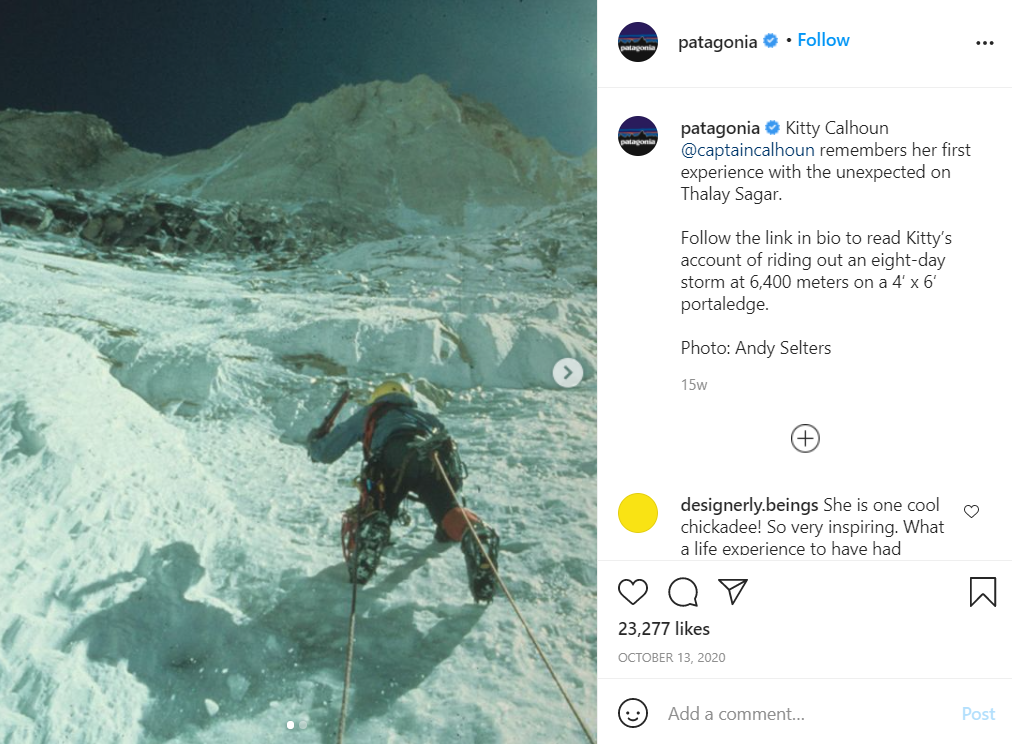 As such, businesses should ensure they include a good content mix of topics next to showing off their products. Think of it as a PR opportunity. Themes like event recaps, BTS (behind the scenes, or #bts on Instagram), employee intros, user-generated content, brand content, and customer reviews are additional ways to tell your company’s story and foster a connection with your followers.

How brands and retailers can use carousels to drive engagement

When we compare carousels, videos, and images, it’s not that one is far better than the others, but key lessons taken from millions of data points show that carousels drive more engagement. A content mix is still important, so rather than eradicating the other formats, try applying some of the findings that have been discussed here, such as:

You’ll be capitalizing on the studied efforts of content creators before you.

Curious to know more about our P2C platform?

All the information you need, without the sales pitch. Just send us your details and we'll be in touch.